Sasquatch is a rock band from Los Angeles, CA. They tend to sip on influences from 70’smetal, rock, and psychedelia. Their songwriting approach is clear–cut; keep the focus on thehook.The band was born in Philadelphia in 2000 and moved to Los Angeles in 2001 after KeithGibbs (guitar, vox) joined up with Detroit natives Rick Ferrante (drums) and ClaytonCharles (bass). Upon Clayton’s departure in 2007, the guys recruited Chicagoan JasonCasanova (Behold! The Monolith, Tummler) to join the fold. We arrive at 2017 and Dr. CraigRiggs (Roadsaw, Kind, Antler) is now shellacking the kit when he’s not brewing coffee orwatching the Red Sox.The band’s music has been featured on a variety of movies, television shows, and videogames including the reissue of Clerks, FX’s original hit series Sons of Anarchy, A&E’s DogThe Bounty Hunter, Jersey Girl, CW’s The Supernatural, and MTV’s Viva La Bam, Bam’sUnholy Union, and Rob and Big, NHL 2005, American Chopper, and Monster Garage.After shaking some walls with not one, but two, closely packed studio albums (the self–titleddebut and „II“) in 2004 and ’06, the power trio went subterranean until 2010 beforeresurfacing with a new lineup and propulsive third opus, „III“, followed up by the straight–ahead rocker, „IV“, in 2013.

Hailing from the west of Norway, the four-piece Slomosa have been making waves across borders. Based out of Bergen, Norway the band has coined their own genre – Tundra Rock – drawing their influences from the bands of the 90’s rock scenes. Inspired by bands such as Kyuss, Queens of the Stone Age and Sleep, their music is both heavy and groovy at the same time, with raw vocals and thunderous guitars, topped with catchy hooks. Since their start the band has built up a solid reputation as a live band, with their energetic and loud live shows.

In October 2019 their first single „Horses“ was released on all platforms, to much acclaim. Their two following singles – There is Nothing New Under the Sun and In My Mind’s Desert – further contributed to the band’s growing hype, with Spotify listing their music on their official Stoner Rock playlist. Both singles further showcased Slomosa’s unique ability to merge heavy riffs with „poppy“ songwriting, catching the attention of music fans all over the world.

In August 2020 the band released their much anticipated self-titled debut album, to great applaud and top reviews. Regional newspaper Bergens Tidende’s reviewer gave the record a full score and called the album „a beast of a debut album“. Metal Hammer UK gave the album an 8 out of 10 score, writing „Slomosa is a spellbinding listen crammed with catchy hooks and guitar heroics that recall Josh Homme during the glory days of Kyuss“.  Spotify listed the album’s second song „Kevin“ on eight of their biggest rock playlists, making the band’s music reach out to over 2.5 million listeners all over the world and the band’s stature to further grow. Amassing a staggering 90 000 monthly listeners and over a million plays in the wake of their debut album’s release, the band’s quick rise has raised eyebrows at home and abroad 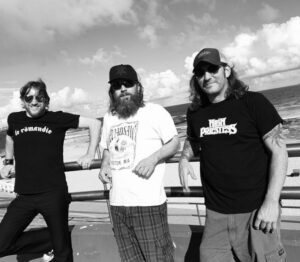 The End of the Future #3

Sample As That Special Edition

Sasquatch (US) and Slomosa (NOR)

What’s Your Nationality? I’m a Drunkard