Julian Sartorius
Drummer, artist and percussionist Julian Sartorius forms sounds into previously unseen shapes.
Julian Sartorius’ precise and multi-layered rhythmical patterns are keen excursions into the hidden tones of found objects and prepared instruments, bridging the gap between organic timbres and the vocabulary of (experimental) electronic music. Julian Sartorius has released numerous solo albums, creates audiovisual art works, collaborates with mu- sicians, writers and artist and performs live in intimate venues and on festival stages.
On his current album «Locked Grooves» Julian Sartorius aims to test infinity: focussing on reduction and repetition, he explores the potential of a repertoire regulated by a loop length of 1.8 seconds. On «Locked Grooves» Sartorius interrogates the idea of a ‘static’ groove, unfurling an endless, meticulously gradated percussive suite. The 112 locked grooves of this album — or 112 one-minute loops on the digital release — unveil an abundance of rhythmic forms, some vigorous, some frail, others impulsive, alluring, and adrift.

Daphne X (she/them) is a Greek sound artist and curator, currently based in Linz, Austria. Equally infatuated with organic and digital sounds and voices, she uses field recordings and sound design to gather, synthesize, deconstruct and expose chimeric and unconventional forms, tonalities, and textures.
With her work she wishes to augment encounters between human and more than human temporalities, to discuss the relation between emerging technologies and radical change, and to explore economies of collective composition, environmental listening, and communal healing.
Her music has been released in labels such as EXILES(HU), tssstapes(IT), Zabra(PO), broadcasted by BBC3 Radio, and Noods, and written about by publications such as A Closer Listen and the Quietus. She is co-hosting a show on Athens’ Movement Radio and Barcelona’s Teslafm.net, and co-runs the Linz-based label Wirtshaus Secrets, and the curatorial platform/dj duo Cachichi.
She is studying at Interface Cultures MA, Linz. 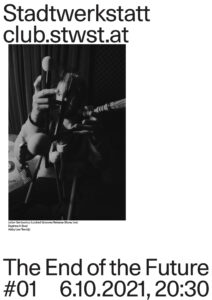 The Rumjacks and Guests