THE BIOGRAPHIC WIFFLE BAT SWINGS WILDLY: Possessing a hyper-literate, intellectual style of rapping augmented with dizzying elocution that would tongue-tie even the fiercest auctioneer, Busdriver is eclectic and eccentric enough to cite vocalese jazz singer Jon Hendricks as a primary influence. Born Regan Farquhar, the Los Angeles MC was introduced to hip-hop culture early — his father wrote the screenplay to one of the earliest films focusing on hip-hop, Krush Groove. He began rapping at age nine, releasing his first record at age 13 with his group, 4/29, named after the 1992 L.A. riots. By the mid-’90s, Busdriver was a regular at the Project Blowed open mic, where he would meet future collaborators and underground luminaries like Aceyalone, Abstract Rude, and Freestyle Fellowship. And shortly after, the vinyl did flow. Busdriver guested on upward of 20 singles, and by 2001 he could no longer be contained by guest spots, releasing his first full-length, Memoirs of the Elephant Man. There were just as many detractors as supporters for his singular style, which was so densely packed it made his chosen name seem a reference for multiple-personality disorder, and the lo-fi production also left more listeners scratching heads than nodding them. His next album, This Machine Kills Fashion Tips (2002), continued in a similar manner before being trumped by better production and more focused rhymes on Temporary Forever the same year. Joined by another West Coast avant-garde MC, Radioinactive, and the breezy, fractured pop of electronic producer Daedelus, Busdriver released yet another odd puzzle piece in 2003, The Weather. Fear of a Black Tangent followed on Mush in 2005. After moving to Anti-/Epitaph, the rapper issued RoadKillOvercoat, which featured production from Nobody and Boom Bip. His second Anti- release, Jhelli Beam, appeared in 2009. In 2010 he put out a full-length mix tape of unreleased gems and illegal remixes called Computer Cooties. It was released as a free album. 2010 saw Bus toiling over a new album that will shock fans and confuse the unconverted into unwilling servitude. It is called Beaus$Eros and will be released in January 2012 on Fake Four. Download preview song „No Blacks No Jews No Asians“ here. Other upcoming projects include a full-length release from Bus‘ new experimental punk band, Physical Forms and a hip hop superduo with rapper Nocando called Flash Bang Grenada.

I’m Anna a.k.a. The unused word. I am a singer, producer & instrumentalist from Austria. I started playing piano when I was six, and first tried producing in 2005 at the age of 20. I started working with Logic in 2008, and founded a choir in 2009 – which, sadly, I had to put on hold about a year later, due to the amount of time I put into my studies. I studied composition at the mdw (Music University of Vienna), which was fantastic, but, contrary to popular belief, I didn’t finish. I left university because my schedule allowed hardly any time for producing. I was so intrigued by music production that I had to focus on it. Basically at the same time, I was invited to join the great Vienna-based Duzz Down San label family. I’ve been a happy part of this team ever since. It’s an inspiring experience to be surrounded by people who like what they do, who are ‚in tune‘ with their creative processes, and who support each other. Check them out here: www.duzzdownsan.net. If you do, you’ll find many different artists and an even broader spectrum of genres, since detours are allowed and encouraged. 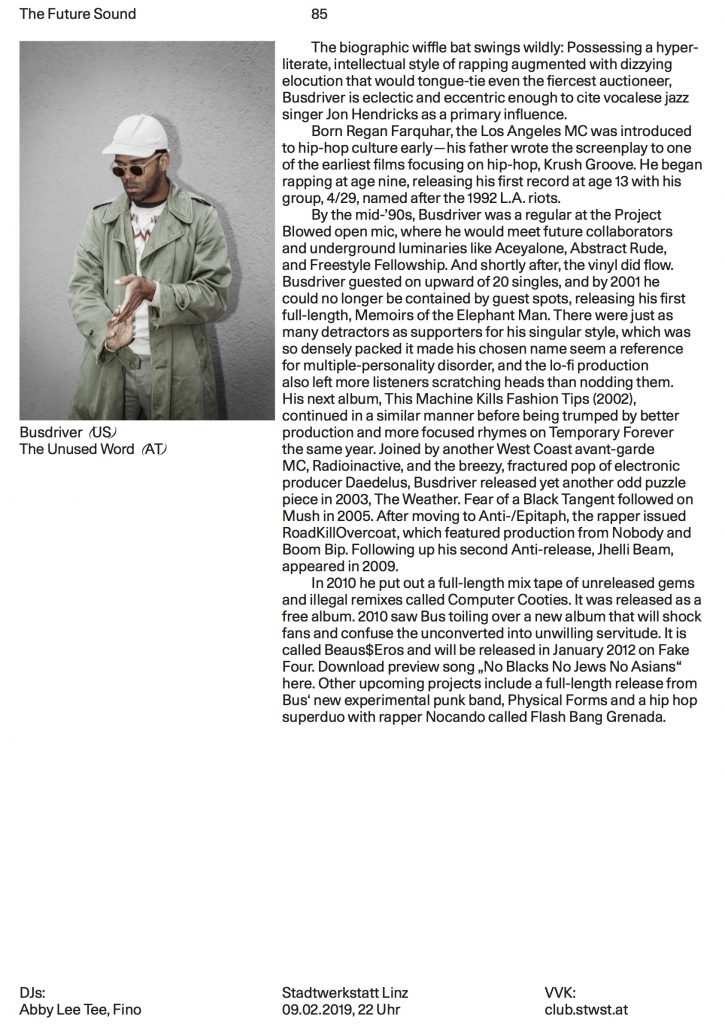