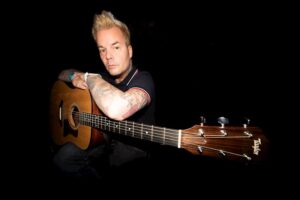 Without a doubt, Russ Rankin has been one of the most influential front men in punk for the last 30 years. With Good Riddance and numerous other projects, he has contributed to the agenda for the punk scene worldwide. On his solo records, Rankin continues to refine his songwriting, delving into social and political topics, as well as the melancholy underpinnings of personal love and loss. With the deftness of experience and an unflinching honesty, his songs seek to understand and embrace the inner turmoil of the human condition – with a fervent desire to champion the best in us. His brusque delivery, instantly recognizable by now, serves as a catalyst in advocating for social justice and animal rights, reaching far beyond the borders of the punk scene.
It has been 9 years since his last solo album – now Russ Rankin releases his new record „Come Together, Fall Apart“ with SBÄM Records on January 28, 2022. With this album Russ redefines his art mixing classic acoustic punk and singer/songwriter styles with country, folklore and rock n roll tropes – with meaningful lyrics fans of Good Riddance can only expect.